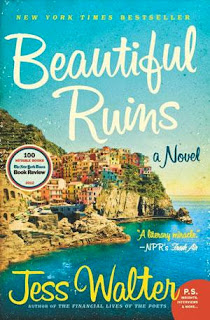 Jess Walter's masterpiece is the rare book you feel should not be reviewed beyond just saying: Read it. I've been a fan of his since Citizen Vince and even went back to read one of his early Spokane detective stories, but Beautiful Ruins raises his work to a new level.

The fabulously layered novel depicts the intertwining of two, three, five and even six lives after a chance encounter in Porto Vergogna, the fictional sixth Terre Cinque, and the runt of the litter. The owner and manager of the Hotel Adequate View is hoping to attract American tourists when a young actress diagnosed as mortally ill comes to stay at his little hotel. What follows is something between a romp and an epic that combines biting satire, incredibly poignant insights into human relationships, and above all a story about how each individual must come to terms with regret.

It is not a sound-bite type of novel but a couple of lines in the excruciatingly elegant climax tell you much about the book: "At that moment, Pasquale Tursi [one of the two main characters] felt wrenched in two. His life was two lives now: the life he would have and the life he would forever wonder about."

A few pages and decades later, Dee Moray/Debra Moore, the other main character, reflects on whether she is at peace or not: "But other times, honestly, the whole idea of being at peace just pisses her off. At peace? Who but the insane would ever be at peace? What person who has enjoyed life could possibly think one is enough? Who could live even a day and not feel the sweet ache of regret?"

Wise enough out of context, these brief quotes are like a mule kick in the narrative. Walter skips through time and place, through points of view, darting from Liguria to Hollywood, to Rome and London and Edinburgh, to Idaho and Seattle, to the American frontier and the retreating Germany army, never once losing the reader or the thread of a narrative of human emotions -- hope, betrayal, forlorn love, unrequited love, death, loss, and above all the realization that your intentions are not always aligned with your actions, that this is the human condition and that you must live with it. There are choices, they have consequences, but there are also many things outside our control that will determine our lives. But they are always our lives.

The author's use of the movie "Cleopatra" and the raging love affair between Richard Burton and Elizabeth Taylor as a pillar of the plot and a meme for life itself is brilliant, and particularly telling for someone like me who lived through the hype at the time. On top of everything else, I actually encountered Burton the summer I interned at AP (1974) when I was sent to join the press mob greeting him when he stepped off a ship at the New York pier. Walter's depiction of Burton as the deeply flawed human being behind the great actor must stand as one of the best portraits of him in fiction.

And yet Burton, though he plays a major role, is a minor character in this sweeping novel which at one time or another deftly portrays an aging Hollywood producer determined to make a comeback, a wannabe screenwriter who learns the art of pitching, an ambitious but ambivalent production assistant, a lost but talented musician, a would-be novelist whose magnum opus is a single opening chapter and a cast of minor characters who nonetheless have vivid personalities of their own.

What more can you ask for from a 337-page novel?
Posted by Darrell Delamaide at 8:15 AM