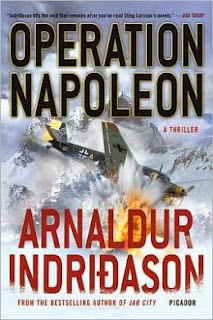 After Steve Berry's sunny romp through Tudor monuments in London, I was ready for some Icelandic winter and Arnaldur Indridason provides it, in spades, in this thriller outside his Erlendur series.

Wikipedia, by the way, tells me that Indridason is a patronymic, not a surname, and the correct second reference to the author is Arnaldur. Which explains why his heroine in Operation Napoleon is referred to by everyone simply by her first name, Kristin, with never a surname. I supposed it explains why Erlendur just has a single name, too.

The glacier is the most compelling character in a thriller that goes pretty much by the numbers. But that is a big plus, because, as I've mentioned before (Arctic Chill), this brooding Nordic atmosphere has a lot of appeal for me. The other immediately noticeable difference from the Berry book is that the language, even in translation, is earthier, more robust. I knew a scholar once who was immersed in ancient Icelandic and other Germanic-root languages, and I think there's an Anglo-Saxon resonance here that is missing from our pasteurized American language.

Otherwise, Arnaldur is lucky he stumbled onto Erlendur, because it allowed him to take his writing to another level and make the breakthrough to an international audience that he would never have reached with more books like this one. The only characters with any dimension to them are the Icelandic characters, and they are in the minority. We have a cast of Americans who struggle to reach two dimensions, and one, Kristin's romantic interest, Steve, who is so flat he is virtually invisible. When he (*spoiler alert*) finally meets his demise, the reader feels absolutely nothing (and Kristin's grief hardly seems heartfelt).

The plot itself is another alternative history. Spoiler alert only for those who are easily surprised -- Operation Napoleon is about a World War II plot to spirit he who shall not be named to a remote island exile rather than death in a Berlin bunker. Arnaldur has some fun playing with a cargo of Jewish gold or plundered art as disinformation regarding the German Junker plane that crashed on an Icelandic glacier in the waning days of the war and whose recovery in 1999 was the obsessive goal of American military intelligence.

In any case, the spunky heroine's ability to elude trained assassins and baffle the not-so-intelligent military is the thin plot that plays out against the dramatic background of Iceland's winter. Nor is it exactly a Hollywood ending for said heroine. Even though she survives her ordeal, her life is permanently marked by her experience.

Arnaldur has the opportunity to air Icelandic grievances about American high-handedness and arrogance in a vastly unequal "alliance" (it's like saying Finland was an "ally" of the Soviet Union), and it's fine to let the mouse have his little roar. In the end, he is no harder on the U.S. government apparatus than our own thriller writers. The politics stops just short of being distracting, but suffice it to say, the writer is on much firmer ground with his Erlendur procedurals than with an imitation thriller.
Posted by Darrell Delamaide at 12:56 PM