The New and Improved Romie Futch 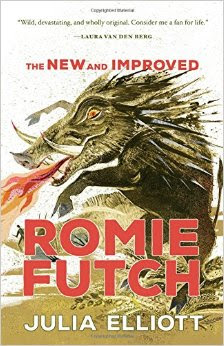 Julia Elliott's prose seems to thrash around like a demon mutant boar but it is in reality a tightly controlled work of art. Her versatility in ranging from Low Country drug talk to discussions of European literature and jazz is breathtaking. But what carries the novel is the narrative of a lovelorn loser who fills the void in his life by following his survival instincts.

Left by his wife, the love of his life, Romie Futch flounders in a haze induced by substance abuse and enabled by his loser high school buddies. He takes part in a fantastical neurological experiment as a lifeline and does indeed benefit from downloads of learning and culture directly into his brain. The "improvement" gives him new motivation to revive his taxidermy business and indulge his long-suppressed creative instincts. His dioramas of mutant animals sets him on the search for Hogzilla, a mutant feral hog spotted in the vicinity of a drug company specialized in genetic modification.

The plot has been called Southern Gothic and fantasy. But Elliott's descriptions of ordinary life glow with the luminescence of a hyperreal painting. Her portrayal of Futch's father and stepmother and their retirement village home, her detailing of the rundown dump Futch calls home, her unflinching view of the malls and restaurants that make up our suburban sprawl -- all of these are spot on.

But the deft character sketches of Futch's buddies, the researchers conducting the experiment, Futch's ex-wife and her new husband also crackle with energy. She can mock the retirement village but make fun of a hip art exhibit opening in converted ammunition depot with equal acuity.

Through it all, Romie Futch pines for Helen, torments himself with bittersweet memories, hangs on to his high school mates and develops a new dependency on his fellow guinea pigs in the experiment. He must cope with migraines, blackouts, and the uneasy feeling that somehow they are still inside his head. Ultimately, he must find a way to resolved the legacy of this experiment and clues he follows through an Internet connection with the shadowy PigSlayer avatar offers him hope of doing so. No spoilers, but Elliott brings it all to a satisfying resolution that still leaves much open.

I will probably want to go back and read Elliott's short story collection, The Wilds, though I'm not a fan of the genre. But I will definitely snap up her next novel as soon as it comes out.
Posted by Darrell Delamaide at 1:30 PM