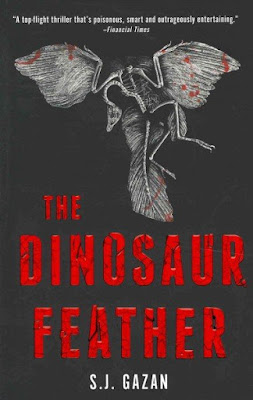 S.J. Gazan's moody procedural sets a murder mystery amid academic intrigue in a biology institute in Copenhagen. She manages to keep the plot moving even as she fills in the back story on half a dozen characters, adding depth and an unexpected human dimension to the Nordic noir.

One theme that clearly emerges is that you should never lie to children because denying them the truth invariably leads to neuroses that affect their adult behavior. Since that is a given, however, the challenge is not to let these neuroses thwart a happy, fulfilled life.

Both of the protagonists, doctoral candidate Anna Bella Nor and "the World's Most Irritating Detective," Soren Marhauge, have submerged childhood secrets tumbling around in their psyches. But it does not stop Anna from successfully preparing to defend her dissertation nor Soren from collecting the clues to solve his mystery.

The academic intrigue revolves around the debate, largely settled, as to whether birds are present-day dinosaurs -- that is these feathered, flying creatures evolved from the gigantic reptiles of prehistory. While the evidence from morphology is overwhelming, the key to proving the connection is finding that elusive feather in the evolutionary process. As this evidence mounts with new discoveries, the thesis defended by an isolated biology professor in British Columbia, Clive Freeman, that birds did not in fact evolve from dinosaurs but that both evolved from an original species.

Gazan takes the time to delve into the past not only of the two protagonists but virtually all the principals after the gruesome death of a controversial Danish biologist from being infected with parasites. As Soren tries to sort through the rivalries and secrets a second murder complicates his task.

All the characters are flawed but most are sympathetic to some degree. Gazan's command of the academic discipline is impressive. At the same time, she has so much understanding for the Goth scene as well as more libertine S&M practices that it seems almost first hand.

In any case, the urbane tolerance we associate with Scandinavians is much in evidence as the characters interact with a certain amount of diffidence. The glimpses of everyday life in Denmark are satisfying and anyone missing all that Nordic nomenclature from the Stieg Larsson novels will find comfort in the Danish place names. I picked this up on a whim at the secondhand bookstore in Lewes and found it very readable.
Posted by Darrell Delamaide at 1:48 PM