This of course is not a book but a film by Roland Emmerich about the true author of Shakespeare's plays, Edward de Vere, the earl of Oxford. The movie got mixed reviews and predictably met a lot of resistance from people who simply don't want to hear it.

It doesn't matter obviously who actually wrote the plays. Whoever it was is dead, and the treasure for mankind is the corpus of literature this author left behind. And yet, curious minds want to know and we always look for further meaning in works of literature by trying to get to know the author's mind better.

This is really the point of Mark Anderson's Shakespeare by Another Name, which I bought the day after viewing the film on DVD. He traces the main details of Oxford's life and notes the overlap in the plays, and it truly does give insight into the work. It was like going to the presentation by Simon Mawer at Politics & Prose the other night and having him explain that his new book, Trapeze, was inspired by his WAAF mother, who actually knew someone like his protagonist, a woman parachuted into France as an agent during the war, and by his father, a pilot who flew missions to drop these agents. 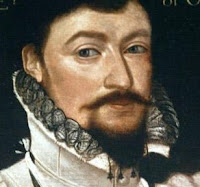 I've been an "Oxfordian" for some time actually. When I went on my fasting cure at a spa on Lake Constance in the late 1980s, I had a lot of time to read and spent much of it reading Charlton Ogburn's The Mystery of Shakespeare. It opened my eyes to the controversy that has been brewing for centuries over the authorship because the idea that the historic Will Shakespere of Stratford-on-Avon was the author was so patently improbable.

As Derek Jacobi intones in a "prologue" in the movie, the fact that Shakespeare died many years after the last play appeared and had no books or manuscripts to bequeath alone is suspicious. He made no mention of any writings in his will and the sole documentary evidence we have of his existence largely deals with his activity as a grain merchant.

The academic establishment nonetheless vehemently defends his authorship. As the torturous Wikipedia article notes, Christopher Marlowe and Ben Jonson were from a similarly un-aristocratic background, and we just happen to know more about them because of, er, their education and their manuscripts. Imagine!

Can anyone really believe that a writer whose worth was widely recognized by contemporaries could die such an obscure death and leave so few traces behind? It's not only Marlowe and Jonson, we know more about Dante and Chaucer and virtually every minute of Goethe's life has been documented. The historical record for this 16th century writer is virtually as thin as it is for Homer or the historical Jesus.

The movie itself is quite good, I thought, though too hard to follow because of all the backward and forward in time. Vanessa Redgrave puts Judi Dench and her eight-minute Oscar to shame with her portrayal of Elizabeth and Rhys Ifans transforms himself into a completely different person to portray Oxford. His sensitive depiction of Oxford's devotion to the power of words make the achievement of the plays freshly memorable. The awe of the other playwrights hearing the magic of this poetry for the first time is infectious.

I'm toying with the idea of embarking on a "Shakespeare project" -- namely, to read the Anderson book, the recent book by Kurt Kreiler and perhaps re-read the Ogburn book (I still have it!) while re-reading or reading the plays themselves. It might be fun to experiment with the functionalities of ebooks while reading -- highlighting, notes, bookmarks. I've already downloaded the Complete Shakespeare (for $1.99!) and will experiment with the Signet annotated editions. If this actually materializes, I may create a separate blog and Twitter account for it.
Posted by Darrell Delamaide at 1:30 PM