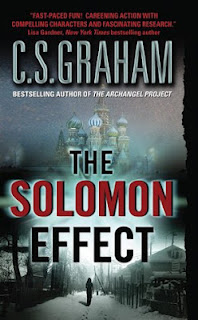 I'm not a fan of paranormal fiction, or at least I've always thought I wasn't. I'm not sure remote viewing counts as paranormal, but since it is a psychic phenomenon it probably does. However, this novel by C.S. Graham, the pseudonym for Steven Harris and Candice Proctor, is an excellent thriller by any measure, with remote viewing playing a relatively minor role.

The writing is crisp and sophisticated, with vivid descriptions and deft narrative. The plot is ingenious, and the settings in Kaliningrad, Germany, Beirut and the U.S. are all brought to life. One of the most winning aspects is the banter between October Guinness and her sometime partner Jax Alexander, which, perhaps because it is a husband-and-wife writing team, manages to convey some real chemistry between the two.

I don't usually like to cast the characters of a book with real actors, but by coincidence I happen to be catching up on two series with actors that would be ideal for the main roles. Tobie is easy to imagine as Mireille Enos, the diminutive strawberry blonde from "The Killing," while Matt Passmore from "The Glades" has the laconic insouciance to play Jax.

The authors are great at instilling sympathy for the good guys -- you really care about Tobie and Jax and Stefan, the young Russian kid who is an important witness to help our heroes unravel the plot, which involves a deadly cargo recovered from a sunken World War II German submarine -- the Sword of Solomon that gives the book its title. The villains, by contrast, are two-dimensional and hard to take seriously. Relying on Nazi evil is a little shopworn for a modern thriller, but the authors find a novel twist to freshen it up. The depiction of a post-Cold War rivalry with Russia is more original.

I've actually been to Kaliningrad and the authors capture its unique situation well -- the former prestigious capital of East Prussia, Koenigsberg, ravaged by war and Soviet occupation, is a historic and geographic anomaly as today's Russian exclave. It is a great setting for this type of thriller. But another anomalous location, Beirut, also comes vividly to live in the novel and even the brief trip to Bremen seems firsthand.

At 389 pages, the book is a trifle long. There's perhaps too much back-and-forth among the various levels of villains, and Tobie and Jax could take a slightly less circuitous route to solving their mystery. The writing is good enough that the reader stays with it, but I think the book would have had more impact had it been a little more taut.

In any case, I'm ready to read more from C.S. Graham and from C.S. Harris, Proctor's other pseudonym.
Posted by Darrell Delamaide at 6:33 AM