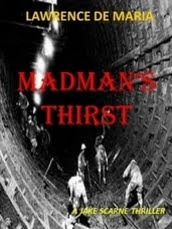 Jake Scarne is back and author Lawrence De Maria has concocted another one of his potent mixtures of mystery, murder, finance and corruption in an entertaining tale involving the brutal rape and murder of a teenage girl, a shadowy real estate magnate and an indomitable private eye with gourmet tastes.

A longtime journalist, De Maria seems to have saved his juiciest stories for his fiction, and this one once again steps behind the scenes of a big city's power brokers -- an influential financial magazine and a local newspaper on the media side against greedy business interests and the best politicians money can buy on the other side.

Scarne, who first appeared in Sound of Blood, is still recovering from the hard knocks he took in that novel but is drawn into this case when the teenager's murder rocks Staten Island and information comes to light that it may not have been a random burglary gone bad but a targeted assassination to get her newspaper editor father off an investigation into some suspect property deals in the borough.

De Maria has a real flair with bad guys. As in Elmore Leonard's gritty novels, the villains here have personalities and preoccupations of their own. They are by and large not very bright, but some even have their own twisted integrity and professional pride. The really irredeemable bad guys usually meet an appropriately grisly end, so justice does prevail. But some others -- those with the redeeming qualities -- at times can even be allies for Scarne as he picks his lonely way through big-city corruption to solve his case.

De Maria inserts a number of novel twists and turns into the plot, and comes up with an attempt on Scarne's life as innovative as any bizarre situation ever faced by James Bond. (No spoilers, but it involves a deadly machine run amok.)

Scarne is still recovering from his white-hot romance in the earlier book, so his ongoing dalliance with Emerald Shields, scion in a media family eerily similar to the Forbes clan, lacks the passion of his previous romance. It doesn't stop him from being mildly flirtatious with other women his investigation brings him into contact with.

The pace is good, though there is perhaps still too much detail about what Scarne eats and drinks. It's not really all that interesting and rarely germane to the plot. Likewise, we sometimes spend too much time with characters who are not integral to the action. These by-plays may add to the overall texture of the novel, but in a book that needs to be a little bit shorter, some of them could have been sacrificed.

But these are quibbles with what is an overall very satisfying trip once again into that De Maria-land (a third novel, Capriati's Blood, explores the same milieu with a different hero) that is probably much closer to reality than we would like to think. There's thrills, there's spills, and the good guys mostly win. What's not to like.
Posted by Darrell Delamaide at 9:03 AM